Cheetos ZigZags were a variant of Cheetos snacks that were first introduced in 1998 and were sold until 2002.

As the name implies, they are made in a jagged zig-zag shape, with the curve typical of Cheetos Puffs. This gives them an appearance similar to crinkle fries.

The TV commercial, which as most of the time would star Chester Cheetah, features iconic Looney Tunes character Daffy Duck acting as Chester's stunt double as part of a film production for a TV ad.

Bag
Add a photo to this gallery 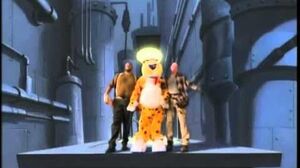 Cheetos - Stunt Double (1999, USA)
Video by The Hall of Advertising]]
Add a photo to this gallery
Retrieved from "https://the-foods-we-loved.fandom.com/wiki/Cheetos_ZigZags?oldid=4749"
Community content is available under CC-BY-SA unless otherwise noted.