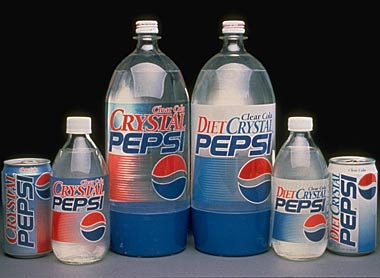 Crystal Pepsi was a caffeine-free soft drink made by PepsiCo from 1992 to 1993 in Canada and the United States, and for a short time in Australia. Crystal Pepsi was sold for a longer time in Europe.

Crystal Pepsi is a soft drink made by PepsiCo. It was first sold in Europe in the early 1990s. The United States and Canada received it from 1992 to 1993, with brief rereleases in 2015, 2016, and 2017. It was briefly sold in the UK and Australia. The product's original market life was sabotaged by competitor Coca-Cola, in a "suicidal kamikaze" plan which sacrificed its Tab Clear product in order to end them both. Crystal Pepsi is notable for a fanatical revival by the public decades later, leading to a corporate response with these rereleases.

In the early 1990s, a marketing fad equating clarity with purity began with the remake of Ivory soap from its classic milky solution;[1] the idea spread to many companies, including PepsiCo. Crystal Pepsi was marketed as a caffeine-free "clear alternative" to normal colas, equating clearness with purity and health.[2] Its marketing slogan was "You've never seen a taste like this".[1]

In 1992, PepsiCo introduced Crystal Pepsi to test markets in Denver, Sacramento, Dallas, and Providence,[3] and the product generated a positive response.[2] Pleased with the results, PepsiCo launched the cola on April 12, 1992,[4] and began to sell it nationwide in 1993. A large marketing campaign was launched, for which the company invented the world's first photo-realistic, computer-generated bus wrap printing. A series of television advertisements featuring Van Halen's hit song "Right Now" premiered on national television on January 31, 1993, during Super Bowl XXVII.[2] Another marketing ploy was to give out full sized sample bottles with the Sunday paper deliveries such as the Boston Globe in Massachusetts. In its first year, Crystal Pepsi captured a full percentage point of U.S. soft drink sales, approximately $474 million.[5] Coca-Cola followed suit by launching Tab Clear on December 14, 1992.[6]

Initial sales were good but quickly fell.[7][better source needed] Pepsi pulled the drink off the market and returned several months later with a reformulated citrus drink titled "Crystal From Pepsi", but this was short-lived as well.[8]

Retrieved from "https://the-foods-we-loved.fandom.com/wiki/Crystal_Pepsi?oldid=4664"
Community content is available under CC-BY-SA unless otherwise noted.