The Giant Sicilian is a particularly large, Sicilian-style pizza that is sold by Big Mama's & Papa's Pizzeria.

With a gargantuan physical measurement of 54 inches by 54 inches (equivalent to 2,916 square inches), it holds the Guinness World Record for the largest deliverable pizza in the world. Comprised of over 20 pounds of dough, a lot of sauce spread out on the crust by hand, over 5 pounds of cheese, and about 3 pounds of pepperoni slices. Overall, the pizza weighs 50 pounds (equivalent to 22.6796 kilograms).

It is cut into 200 square slices, which feeds 50 to 70 people, and is delivered to the customer in a specialty-sized box. The pizza box is carried in a special container mounted on top of a special delivery car. Because of its size and weight, it takes two people to carry the pizza itself.

The Giant Sicilian is sold for $299.99 (plus tax) because of its scale when compared to Big Mama's & Papa's standard-sized pizzas. Additional toppings for the pizza are $19.99 each. For an additional $34.99, the customer could request for extra cheese to be added to their order. A 24-hour advance notice for the delivery is required. Along with that, The Giant Sicilian is sold only at Big Mama's & Papa's Burbank and Northridge locations.

Big Mama's & Papa's also has a competitive eating challenge based on The Giant Sicilian, dubbed the Grand Sicilian Pizza Challenge, in which a team of six to eight contestants attempt to eat an entire Giant Sicilian pizza within a two-hour time limit. There is a cash prize for the contestants that manage to finish the pizza, depending on how many of them are taking on the challenge at a time; $1,000 for eight contestants, or $1,500 for six. 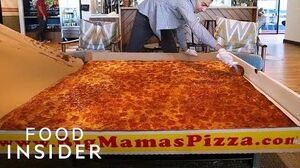 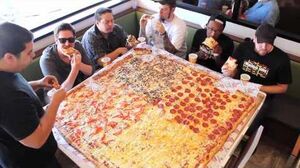 Retrieved from "https://the-foods-we-loved.fandom.com/wiki/The_Giant_Sicilian?oldid=4751"
Community content is available under CC-BY-SA unless otherwise noted.